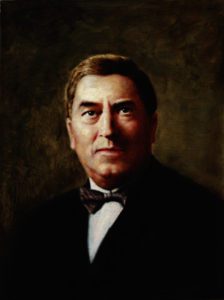 The program opened with the ethereally beautiful Requiem by Maurice Duruflé performed with strings, trumpets and organ. Duruflé composed the Requiem, op. 9 in 1947 on a commission by the French publisher Durand. He wrote it in memory of his father using themes from Gregorian chants. Duruflé uses these melodies, and the rhythmic flexibility of chant to infuse the work with a lyrical freedom and to musically color the drama of the text. The work was last performed for the Evensong Series in 2006.

The second half of the program opened with two works for orchestra, the well known Nimrod from Elgar’s Enigma Variations and two movements from Peter Warlock’s Capriole Suite. The choir then took the loft again for eight anthems from the pen of some of the greatest English composers, starting with Hubert Parry’s I was glad, an anthem fit for royal weddings and coronations. The concert concluded with David Willcocks’ clever anthem Sing, sung to the accompaniment of Widor’s Toccata from Symphony No. 5.